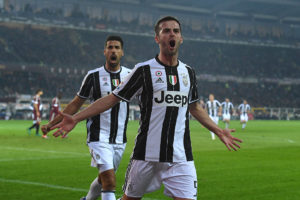 The winter transfer window is open and you know what that means: Countless Arsenal rumours exciting the Gooners around the world before inevitably shattering all those hopes – probably. Although Arsene Wenger has indicated that the club won’t do any business, according to The Sun’s, Emanuele Giulanelli, Juventus’ Miralem Pjanic, has been identified as a future replacement for Santi Cazorla.

Apparently, Wenger has had a conversation with the 26-year old about a transfer and the response is ‘positive’, meaning there could soon be a ‘verbal agreement’.

The Bosnia and Herzegovina midfielder has been a vital part of Juventus’ squad, having already made 20 appearances this season, while he has also netted six goals, and that just explains how reluctant the Italian Champions could be to let such a player leave in January. Irrespective of their willingness, if the rumours are anyway near the truth, you never know if we may actually see a big arrival at The Emirates Stadium. Arsene Wenger’s phone calls do work.