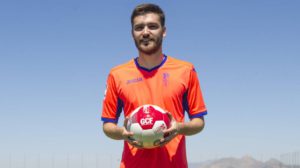 Arsenal’s Jon Toral is considering making a move to Rangers having been unable to break into Granada’s first-team this season, according to the Express.

The Spaniard had a superb season on loan at Birmingham last year where he won the ‘Goal of the Season’ award to go along with the Players’ and Supporters’ ‘Player of the Season’ awards. However, he was deemed surplus to requirements this season and he was sent on loan to La Liga side, Granada.

The Spaniard though, has not been able to make a significant impact with Granada and is now considering cutting his loan spell short to join Rangers for the rest of the season.

Indeed, Mark Warburton coached Tora at Brentford and is a big fan of the youngster.

“I met with Arsene Wenger and he asked me if he’s got the potential to play in the top flight. I’ve no doubt he has. He is a tremendous talent. He is young and hungry and wants to play at the highest level possible.”