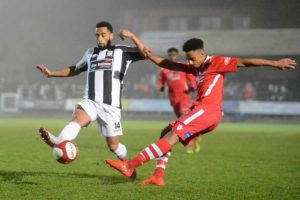 After a successful two-day trial, Arsene Wenger confirmed today, that non-League defender, Cohen Bramall had signed for the club.

Bramall made the move from the eight-tier of English football last year with Market Drayton and is now playing with Hednesford Town in the Evo-Stik Northern League Premier Division.

The youngster, who was rejected Crewe Alexandra as a youth, will join the Gunners on a two-and-a-half year deal and Arsene Wenger has already remarked the youngster’s pace and likened him to Ashley Cole and Ashley Young.

After a disappointing draw with Bournemouth, many Arsenal fans were hoping Arsenal would sign a top notch player this month, thus the transfer has received mixed reviews on Twitter.

Look, I'm not saying Cohen Bramall is elite. All I'm saying is Sheffield Utd named their stadium after him & he's never even played for them

Cohen Bramall got sacked as a car salesman and a few weeks later joins Arsenal? Who's arsed about the Jamie Vardy story any more?

@Arsenal FC on a verge of signing a 20-year old Cohen Bramall in January! My God, who is scouting for #Afc. Wenger still letting us down!