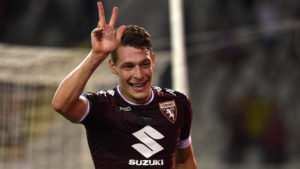 News broke yesterday that Arsenal had bid €65 million for Torino striker, Andrea Belotti, which the Italian club have rejected.

Although Arsenal have Danny Welbeck returning from injury, Lucas Perez, Olivier Giroud and oof course, Alexis Sanchez, the club have been heavily linked with the Italian striker. Gianluca Petrachi, Torino’s sporting director, told Sky Italia that the club had rejected the bid as they view Belotti as worth much more than the €65 million bid.

Contrary to reports, however, Sky Sports journalist, Kaveh Solhekol has reported that not bid has been submitted from Arsenal, although he is one of the best talents in Serie A.

Belotti said to be best young Italian striker in Serie A. 14 goals in 18 games this season. His Torino contract has €100m buyout clause