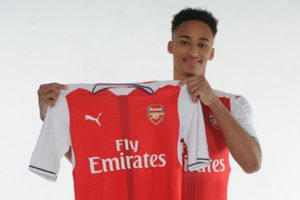 Arsenal have announced the signing of non-League left-back, Cohen Bramall.

After a successful trial with the club, Bramall will join the club for a fee of £40,000 from Northern League Premier Division team, Hednesford Town and link up with Steve Gatting’s under-23 side.

Following the announcement, Bramall spoke of his adulation about joining the club, especially after being made redundant from his job.

“I got made redundant by Bentley on the Tuesday [20 December], which was crazy because I didn’t know what I was going to do,”

“My agent Lee Payne rings me on the Wednesday saying you’ve got a trial at Arsenal. I was like ‘what?’ – I was gobsmacked.”

“Bramall is a young, promising left-back who has a lack of experience at the top level but who has fantastic ingredients,” Gunners manager Arsene Wenger said.

“He has tremendous pace, a good left foot, a great desire to do well. Overall, he’s a very exciting prospect.