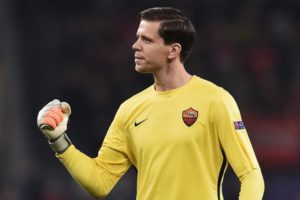 Roma are hoping to seal a deal for on-loan Arsenal goalkeeper, Wojciech Szczesny on a permanent deal according to Corriere dello Sport.

This is Szczesny’s second season on loan with the capital club and has become a key player in Luciano Spalletti’s title-chasing club. Although, Szczesny has praised the coaching he has received in Italy, the Polish ‘keeper would ideally like to return to the Emirates and fight for a place in the first-team.

The 26-year-old, however, will find it hard to regain his place in the first-team with Petr Cech firmly entrenched as the starter, while David Ospina is also a contender, moreover, Arsenal have been heavily linked with a new younger goalie as Wenger looks towards the future, namely Jordan Pickford.

A permanent stay in Rome, could well be the most likely destination at this point in the Polish goalkeeper’s club.