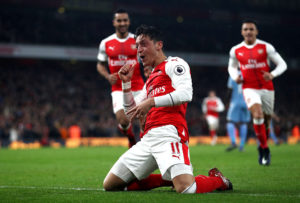 Mesut Ozil has missed the last three matches with illness but he finally rejoined the team the first-team this week.

Hector Bellerin, on the other hand, picked up a knock last week and was not risked for the FA Cup game last weekend against Preston but it is thought to only be a minor injury – he should be available.

Kieran Gibbs has not featured since he sustained a Boxing Day knee injury but he has progressed very well and could push Nacho Monreal for a starting spot. With Monreal available, Gibbs will be available for action but will likely start on the bench.

In other news Theo Walcott is not far off a return while Danny Welbeck is being assessed following his first start of the season on Saturday.