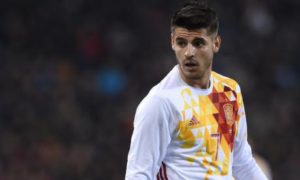 According to reports in Spain, Arsenal will reignite their interest in Summer transfer target, Alvaro Morata this month.

Arsenal were heavily linked with a move for the Spaniard last summer but he eventually returned to Madrid after spending two seasons with Juventus. Arsene Wenger is a big admirer of the striker and is keen to relaunch a bid for him this month.

Morata has struggled with injuries this season but has still managed to score nine goals so far this campaign. Moroever, the Spaniard has had to contend with Karim Benzema for a starting spot, thus a move to the Gunners could well provide him with an opportunity to play on a much more regular basis. Madrid are keen to keep him but with their transfer ban lifted, alternative recruitments could be on the way in, which would push Morata further down the pecking order.