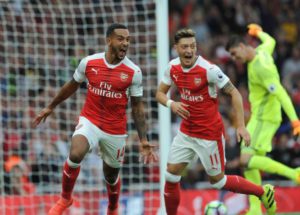 Arsenal were without Mesut Ozil, Alexis Sanchez, Laurent Koscielny and Petr Cech in Arsenal’s game last weekend against Preston North End. Ahead of Arsenal’s game against Swansea at the weekend, Arsene Wenger gave an update on the team.

Wenger confirmed that the team is practically the same but with rKoscielny, Cech, Ozil and Sanchez all returning to the squad, while Bellerin and Coquelin are likely to miss the game.

“Basically we have the same players available as last week, plus Koscielny is coming back, Petr Cech is back in the squad, Mesut Ozil and Alexis as well. Hector Bellerin is still out, Francis Coquelin is still out – they could make next week, they are not far.”

Moreover, Theo Walcott is still out. The winger was having a superb season until he picked up an injury a few weeks ago.

“Walcott is still out. He is one of the players who doesn’t come back. But he was not rested last week, he was injured. He is now out for three-and-a-half weeks, and I think he will not be available for Burnley. He will need another week, two more weeks.”