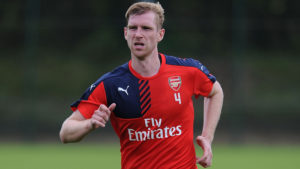 Arsenal are close to agreeing a new one-year contract extension with Arsenal, according to The Times.

Although the former German international is still making his way back from injury, Arsene Wenger had confirmed earlier this month that the club would activate an option in his contract to extend his deal by an additional year.

Arsenal’s club captain has not played a single game for the Gunners since picking up a knee injury during pre-season, which led to multiple reports that he would leave Arsenal this month – likely on a six-month loan. Hannover and Werder Bremen had been linked with the German.

Even if Mertesacker does sign a new deal – thought to be around £70,000 a week – Wenger is still keen on loaning him out for the remainder of the season.