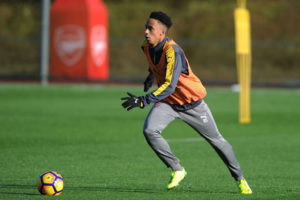 Arsenal new boy, Cohen Bramall made his debut for Arsenal on Monday night as the under-23 side beat Southampton 3-1 in Premier League 2. The debutant, who joined the club last week, played 83 minutes for Steve Gatting’s side and spoke about the step up in quality, as reported by Arsenal.com.

“It was so fast… it was hard to get used to. I just need to do well now, keep training and keep getting better and better. Hopefully, I can get to where I need to be in the future.”

“It’ll be a big challenge, because from Hednesford in the league I played in, it was pretty slow and I had a lot more time on the ball than I did here. It was fast and I need to be better and think quicker on the ball.”

Although he admitted the pace caught him by surprise, Bramall insisted that he become more comfortable as he plays more.

“I think in the next game that I play, I’ll be a lot more confident. I can trust my team-mates more and just hopefully get to know the players a lot better.

“It was amazing. I’m just happy that in my first game for Arsenal that we got the three points really.”