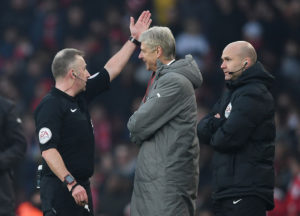 Arsene Wenger has been charged by The FA for misconduct following his alleged foul-mouthed remarks aimed towards the fourth official on Sunday.

It may have all ended with celebrations and happiness as Alexis Sanchez snaffled the game with a 97th minute Panenka, but it seems the aftermath may yet be ugly – if it isn’t already.

Wenger had already been fired up by the Anthony Taylor’s decision to signal seven minutes of stoppage time, and as referee Jon Moss awarded Burnley a penalty in the dying stages of the game, the Arsenal boss completely lost his composure and got sent off before he pushed the fourth official.

Later on Sunday, Wenger apologised for his conduct.

“I regret everything. I should have shut up and gone in and gone home, basically, and I apologise for that.”

“It was nothing bad. I said something that you hear every day in football. But overall, nine times out of 10 you do not get sent to the stands. But if I am, I am. And I should have shut up completely.”

An official statement on FA’s website read as follows.

“It is alleged that in or around the 92nd minute, he [Wenger] used abusive and/or insulting words towards the fourth official. It is further alleged that following his dismissal from the technical area, his behaviour in remaining in the tunnel area and making physical contact with the fourth official amounted to improper conduct.”