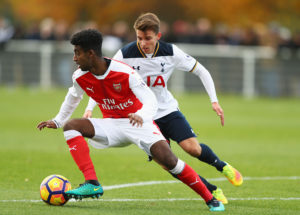 According to De Telegraaf, Arsene Wenger will decide on Gedion Zelalem’s future within the next 24 hours.

Zelalem had been linked with a move to Borussia Dortmund earlier this month but it now seems a loan move to Dutch side, VVV-Venlo for the rest of the season is the more likely route.

Zelalem did have a successful loan spell at Rangers last season and was expected to finally break into the first-team this season. Instead, he has only featured twice for the Gunners, both times in their unsuccessful EFL Cup campaign.

The 19-year-old is highly regarded by the club but it seems another loan move could be on the cards, which, if confirmed will see Arsenal send another player to Holland.