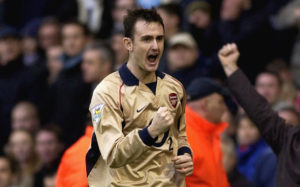 Ex-Arsenal and Everton man, Francis Jeffers has revealed that he should never have joined Arsenal from boyhood club, Everton, as reported by the Mirror.

Jeffers made the move to Arsenal for £8 million back in 2001 but couldn’t make an impact on his new club. At one time Jeffers was regarded as one of the best young talents in England but after making the move to Arsenal, he struggled to break into a very competitive first-team and eventually left in 2004.

Having left Arsenal Jeffers struggled to reignite his career and even had stints playing in Malta and Australia. Now a coach at Everton, he admitted that the move to Arsenal was a big mistake.

“I’ve got to be really honest, looking back on my career I left the club too soon. I went from being a regular at Everton to going down there and not being able to get into the team.”

“I feel my head was turned. I was only young. It was difficult because I felt Arsenal were the best team in the league at the time. It was a big decision but one that never worked out for me.”