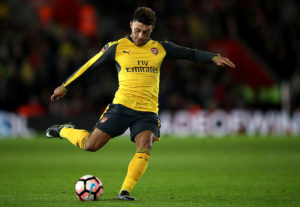 Arsenal stormed to a 5-0 win over Southampton on Saturday to progress to the fifth round of the FA Cup.

The Gunners were too much for the Saints, who although had fielded a somewhat weakened side, are still Arsenal’s bogey team. Theo Walcott scored a hat-trick against his former side, while Danny Welbeck – who made his first start since his return from injury – bagged a brace.

One player, however, caught the eye of the Twitterverse following his superb performance in midfield. Alex Oxlade-Chamberlain partnered Reine-Adelaide and Maitland-Niles in midfield to create a midfield three that helped dominate Southampton.

Alex Oxlade-Chamberlain had an amazing game imo. Controlling and dominating the midfield tonight.

Great goal, that. Hell of a pass from Alex Oxlade-Chamberlain, then a lovely touch and calm finish to knock it under the keeper. #Welbz

Oxlade-Chamberlain looked phenomenal in the middle today, great passing & drive, really put down a marker, hopefully he keeps it up #AFC