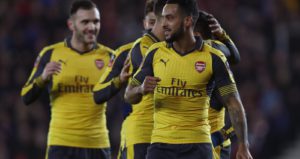 Arsenal hammered Southampton in the FA Cup fourth round, hitting five past them to finally put the “Saints away” curse to bed and record their first win in 14 years at the St. Mary’s Stadium – Arsene Wenger would be relieved to see that.

As Danny Welbeck and Theo Walcott ran riot against Claude Puel’s side, Twitter looked in sublime form too, and there were interesting reactions aplenty. From praising Danny Welbeck for channelling his inner “Salt Bae” to branding Steve Bould as the league’s best bald manager, here is how the Twitteratis erupted.

He's got a lot of game has Welbeck. Let's hope his luck changes on the injury front.

Give it Steve Bould til the end of the season. #SOUARS