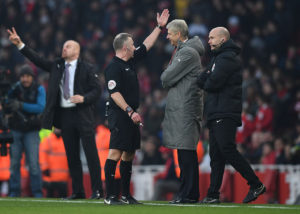 Arsene Wenger believes that although he was given a four-match touchline ban and a £25,000, some of his critics would’ve liked to have seen him punished more severely, as reported by the Guardian.

Following a decision – a penalty to Burnley – from referee John Moss, Wenger lambasted fourth official, Anthony Taylor. Wenger also appeared to push Taylor after being sent to the stands as he insisted in watching the game from the tunnel. Due to the push on the official, The FA consequently charged the Arsenal boss, resulting in the four-match ban.

“I do not want to judge the judges, I got a sentence and I decided not to appeal to just get this behind me. For those who don’t like me, any sentence will be too lenient. They would like to put me in jail somewhere without any heating in the middle of winter – and that would still be lenient.”