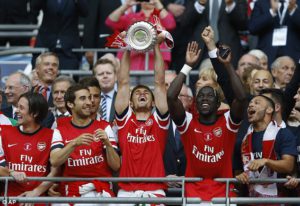 The FA Cup draw took place tonight and in what will be one of the ties of the tournament, Arsenal were drawn against National League team, Sutton United FC.

The Non-League team pulled out one of the surprise upsets of the previous round to beat Leeds United and will host the Gunners at Gander Green Lane next month. In what will add some extra spice to the game, Sutton currently have three ex-Gunners playing for them: Craig Eastmond, Roarie Deacon and Jeffrey Monakana.

This will be the first time the two teams have played against each other in a professional game.

…and we'll be heading to south London to face @suttonunited pic.twitter.com/3T9HN8HIaw