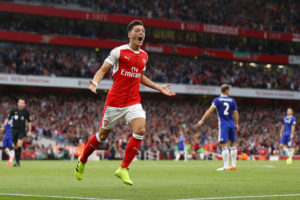 With 22 games player in the Premier League, Ray Wilkins thinks Chelsea’s eight-point gap over Arsenal is too much for the Gunners to eat up. The ex-Chelsea man believes the Blues are too versatile in their play for the Gunners to beat them. Chelsea also have the added benefit of not having to play European football, thus limiting the game time and likelihood of injuries, something Arsenal have been guilty of over the last few years, another reason Wilkins think Arsenal won’t have enough to overcome Chelsea in the long run.

“I think they are too far behind. They are playing the mighty Blues on Saturday at Stamford Bridge and I think Chelsea will beat them.

“Chelsea don’t play European football this season and, having watched them, they can play any way. They can play with the ball and they can play if people put them under pressure. I can’t see Arsenal beating Chelsea on Saturday.”