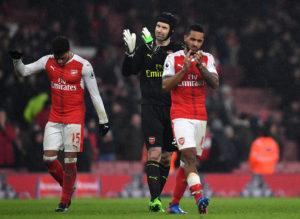 Petr Cech has admitted that the loss to Watford, is a “huge setback” to Arsenal’s chances of winning this the title this season.

Chelsea’s draw to Liverpool meant that had the Gunners won against Watford, the gap between them and Chelsea would’ve been cut down to six points, whilst also putting more space between them and fellow title chasers Tottenham and Liverpool.

After two early goals, which ultimately killed the game, Cech was reasonably candid about Arsenal’s performance in his post-match interview.

“This was a huge setback because this was the game we wanted to win.”

“We wanted to put ourselves in a better position going into the weekend. I always say that at this level you cannot play 80 minutes, or 85. You have to play 90 minutes with full concentration and everybody on top of their game.”

“We were second best in the first half. We made so many bad passes, we lost every challenge, we were simply second best, as I said.”