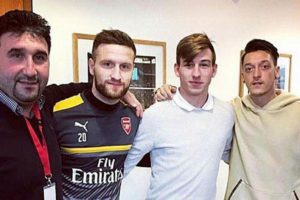 Arsenal have a handed a trial to 20-year-old midfielder, Daniel Hanslik according to reports.

The young midfielder has scored 14 goals in 18 appearances for SV Steinbach this season and has attracted interest from not only Arsenal but also Borussia Dortmund. Due to his excellent performances, Arsenal have handed the young German a trial at the club with a view to offering him a deal if he is successful.