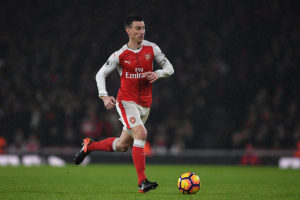 Arsenal’s vice-captain, Laurent Koscielny has spoken candidly following their 3-1 defeat to Chelsea. In his post-match interview, Koscielny did not pull any punches while concluding that no Arsenal player had a good game on Saturday afternoon.

It’s been a tough week for the Gunners who lost their second game in a row, following a surprise defeat to Watford on Tuesday night. Although Arsene Wenger praised the character and quality of his team this week, Koscielny in somewhat contrasting fashion, concluded that the cohesion of the team was incredibly poor.

“I don’t think we played very well together in the same way, it was more one player after one player.”

“I think we’d have had a lot of chances if we’d played quickly with our passing, on the flank we had to combine to have some opportunities.”

“We did it in the first half. During a big game, if you don’t take your opportunities, it’s difficult to win the game. We need to be more efficient in both boxes.”