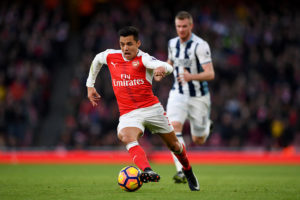 Although Arsenal lost on Saturday, Sky Sports pundit, Thierry Henry still believes that Alexis Sanchez is the best player in the Premier League on current form.

The ex-Arsenal man took to Twitter on Sunday to insist that the Chilean star is the best all round player currently playing in the League. Sanchez has scored 15 goals this season – second best in the Premier League – while also registering eight assists.

The winger come striker has been a huge part as to why Arsenal sit in the top four and would be a huge loss to Arsenal if does indeed leave the club.

you cannot deny @alexis_sanchez in terms of his passing, pressure & goals…