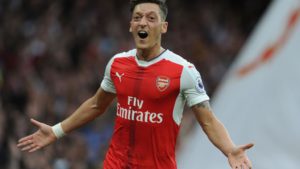 Martin Keown has argued that Arsenal’s star midfielder, Mesut Ozil, is an expensive luxury for Arsenal in big games, as reported by the Metro.

Since his big-money move from Real Madrid in 2013, Mesut Ozil has been a constant source of criticism due to his poor performances in big games. Moreover, many have concluded that Ozil does not work hard enough in games, unlike the perpetual motion that is Alexis Sanchez.

Speaking recently, Martin Keown has argued that Ozil was pretty much a passenger for Arsenal against Chelsea.

“After Saturday’s defeat by Chelsea, it was interesting that Wenger said that senior players did not perform,”

“That is really unusual for Sanchez but Ozil becomes an expensive luxury when you are out of possession. Ozil does not know his role when Arsenal do not have the ball and it is the responsibility of the manager to tell him.”

“You don’t know when he is coming or going. We saw it against Chelsea – Sanchez is saying, ‘Come on’ but Ozil does not really want to go and press.”