In an interview with L’Equipe, Thierry Henry has insisted that he did not criticise Arsenal striker, Olivier Giroud, although it was heavily reported that he had.

In the interview, Henry has come out in full praise of Giroud and in fact even argued that he’d have loved to play with him during his time at Arsenal. The ex-Invincible was portrayed as criticising Arsenal’s current French striker, with Henry going as far to say that Giroud was not good enough to lead the line for Arsenal. In the recent interview, however, Henry has clarified his comments.

“I would like to have played with him, ss someone who brings others into play, he is extraordinary. I never criticised him. I responded to a question: ‘What must Arsenal do to become champions?’”

“To that I said that Giroud cannot be the only forward if Arsenal are to win the league. Some weeks before that question I was praising him. But no-one remembers that.”

“It’s been the situation for two years. I replied that Arsenal need a stronger spine, few injuries and for Mesut Ozil to lift his level to that he had played the season before. And another attacker other than Giroud, so there are more solutions and options in attack. 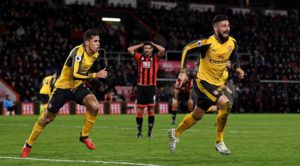 With Alexis Sanchez as the main forward, Arsenal have resembled a somewhat more balanced attack with the Chilean scoring 15 league goals, while Giroud has chipped in with eight. This is the variety, Henry argues is what he had during his time and insists that it’s what Arsenal need to win titles.

“I won the title because Kanu, Sylvain Wiltord and Freddy Ljungberg all scored at the end of the season. The goal in Manchester was scored by Wiltord, not me.”

“This season, Alexis Sanchez is playing in attack. He’s the spearhead. And Olivier is doing enormous work, he is staying strong in his job.”