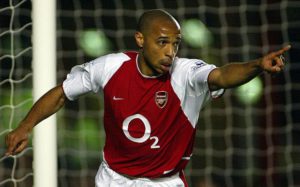 Arsenal legend has admitted that he has not planned out a path for his coaching career and that he must prove himself before he takes a big managerial job.

In an interview with L’Equipe, the Arsenal legend revealed that he would love to one day return to as Arsenal as a coach but maintains that he must first prove himself.

“Everyone thinks I dream of Arsenal. Yes. But it’s just a dream. How could I be pretentious enough to think they’ll have me?”

“I’m just starting. I’m trying to become a coach. I’ve no pretence to know where I could go one day. I’ll go where I’m wanted.”

Following his retirement from football, Henry quickly returned to England to work as a pundit for Sky Sports but also to work on his coaching badges. It was not long before Henry was offered a route back to Arsenal, to coach the under-18s, but he soon left after he and Wenger clashed over his media requirements whilst coaching at the club.

“It was simple. The academy boss offered me the post of Under-18s coach. Arsene said that it was not compatible with my role as a pundit.”

“It finished there. I’ve enormous respect for Arsenal. I left. I was not disappointed. I have no priority. I must prove that I am able to coach.”