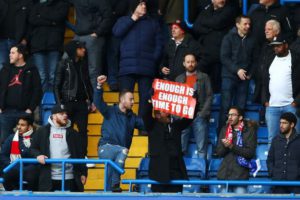 Following a tough week, whereby Arsenal lost to both Hull and Chelsea, Arsene Wenger has once again come in for heavy criticism from the fans. The Arsenal boss, however, has insisted that he does not pay attention to the criticism.

At the end of the Chelsea game on Saturday, a fan unveiled a placard which read, “enough is enough time to go”. Gary Neville quickly bashed the fan for disrespecting the work that Wenger has done, although the Arsenal boss told the press today that he is not interested in the view of one particular fan.

“In the football club it is important for different opinions but we focus on what matters to us.”

“What matters is not the opinion of people but how we respond. This is a period where we have to stick together and focus.”