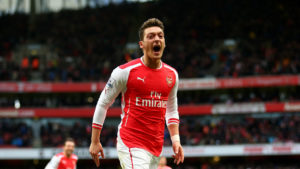 Ex-Chelsea footballer Michael Ballack has advised Mesut Ozil to join Bayern Munich if he wants to win big trophies in his career.

The 28-year-old has only managed to win two FA Cups and as many Community Shields during his time at Arsenal, and with just 18 months remaining on his current deal, the time has finally come for the German to ponder whether he wants to remain a Gunner or not.

Arsenal have reportedly offered Ozil a new deal with a significant pay rise in place, however, as the German has made clear, it’s not just the money but also the contract situation of Arsene Wenger that is a big factor in his decision.

Ex-Chelsea man Michael Ballack believes it’d be the right time for Mesut Ozil to move to the Allianz Arena as that’s where his talent would be served best he told Bild (h/t Sky Sports).

“Many clubs like him. But he knows that he enjoys a very high place at Arsenal. He lives in London, one of the most beautiful cities ever.”

“To this end, Arsenal is a club that has an incredible impact on the world. If you are a top player in England, the cult around you is bigger than in Germany. You are treated more respectfully, especially. These are all reasons for an extension [with Arsenal].”

“But if he could win something big, the chance at Bayern is, in my opinion, bigger.”