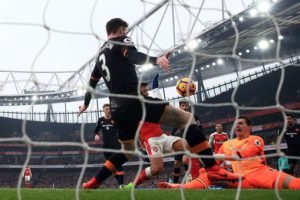 After two poor results, Arsenal returned to winning ways with a 2-0 victory over Hull City.

Arsenal’s star man, Alexis Sanchez bagged the two goals to give Arsenal the win albeit the first, was fairly fortuitous. After a clearance off the line from Andrew Robertson, Sanchez moved to poke the ball in only for the Hull City goalkeeper, Eldin Jakupovic to block the shot which then ricocheted off Sanchez’s hand.

Although Arsenal went on to score a second, the first will remain as one that probably should’ve been disallowed.

Arsenal won the game but the football fans weren’t happy that the first goal wasn’t disallowed.

Arsenal won earlier on with Sanchez brace with 1st goal clearly handball and how it wasn't seen by officials very poor!

Ref tells Hull players he wasn't 100% sure re Sanchez handball and has apologised. So basically he guessed. Unbelievable

While Sanchez's handball wasn't deliberate, I can't see how the goal can stand – and I'm an Arsenal fan. #coyg #ArsHul

PENALTY! Arsenal get a penalty for a handball, having scored a goal thanks to a handball earlier.