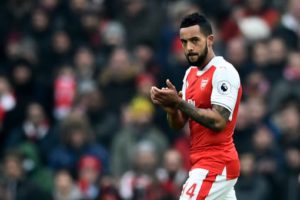 Arsenal scraped through a tough, anxious and tense encounter with Hull City on Saturday afternoon to bounce back from successive defeats to Watford and Chelsea respectively.

It may not have been the prettiest performance from the Gunners but Arsene Wenger’s men desperately needed to stop the rot.

In a nervy game, there was a moment of slight hilarity for the fans as after a somewhat innocuous tussle, Theo Walcott confronted Hull defender, Harry Maguire. It’s safe to say the obvious size difference, didn’t go unnoticed by the Twittersphere.

What's gone wrong with Theo Walcott? Used to be such a nice boy. Now he's grown his hair out, is wearing short sleeves and getting in fights

Walcott on Maguire there pic.twitter.com/aBsmTf89Oh

Imagine Theo Walcott losing his temper with you, and the strongly worded letter that would ensue