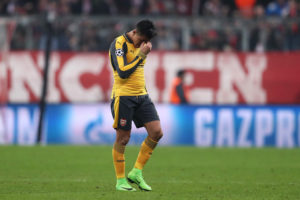 After a promising first-half which saw Arsenal level with the German league champions, the wheels fell off in the second-half, after a Koscielny injury which led to three goals in 10 minutes. Bayern didn’t stop there though with Thomas Muller capping off the embarrassing night for the Gunners with a late fifth.
Not many saw a 5-1 drubbing in the first leg but in reality, after a second-half devoid of any threat from Arsenal, the result was completely foreseeable. With that said, here are the four things we learned from the game.
1) Ospina is not a top level goalkeeper 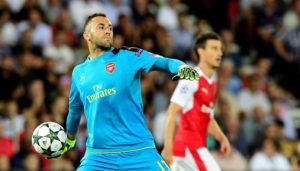 Throughout the last few weeks fans have been clamouring for Ospina to replace Petr Cech in the starting XI and tonight they got their wish. Despite an unstoppable shot from Robben in the early stages of the match and coming up with a couple important saves in the first-half the noticeable rust and lack of games showed for Ospina in the second-half. Once Gabriel was brought on for the injured Koscielny the team allowed four second-half goals as the back line was torn to shreds.
2) Coquelin should not start 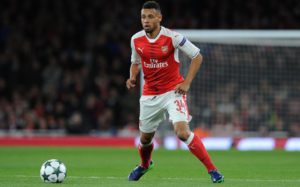 The Arsenal midfield has been a rotating sideshow of injuries and bad pairings all season and on Tuesday tonight, it was no different. Coquelin hasn’t fit into many of the better pairings in many matches at all and looked completely overmatched by the wealth of talent in the Bayern squad.
Xhaka looks the part as the first team starting central midfielder with his great passing skills, laser accurate shot, but he just needs to keep his discipline. Coquelin on the other hand, is just not of the level to be playing in a Champion’s League away match. He is an offensive liability and has lost his defensive edge throughout this campaign.
3) Ozil’s head isn’t in the game 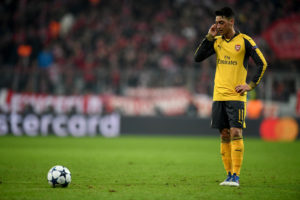 Ozil has caught a fair bit of criticism over the last few weeks with poor showing after poor showing. The debate flared up this week as to whether he should get a spot in Arsenal’s starting XI for this crucial match. After getting the nod to start for Arsenal he didn’t have any influence against Bayern. He didn’t create much in the way of chances, showed no effort on defence (especially for the Robben goal), and overall was all too quiet for a player of his calibre in such a meaningful match.
It seems to me he has something on his mind and it feels like it’s somewhere between greener pastures and a lack of respect of his teammates.
4) The team has quit on Wenger 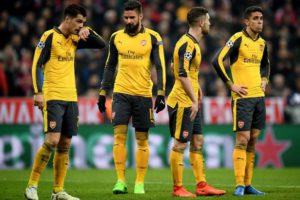 The Arsenal that most of us grew up with didn’t give up cheap goals the like of Cech giving a goal away for against Chelsea. They also didn’t give up goals like the one that Oxlade-Chamberlain gave up at the end of the game tonight against Bayern. The club appears to have lost focus on all fronts and that means that the players have stopped listening to Wenger or Wenger himself has lost the entire plot.
You know what happens when a new manager arrives at a team? The team plays great because everyone knows they have to earn their place in the team all over again. I believe that Wenger has a great eye for talent, is very loyal to his players, is capable of building a competitive team, but has been passed by with modern tactics and in-game managing. I also believe that once you’re so loyal to a group of players for so long that they know they will get a run if they are patient enough and not if they’re good enough, that leads to poor performances. If you start hearingthe same things for too long players get very complacent and comfortable and that leads to poor performances.
Tags:arsenal, bayern munich, UEFA Champions League