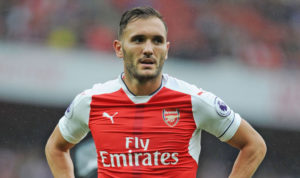 Following shocking reports that Arsenal forward Lucas Perez, is reportedly keen to leave the club, his agent, Rodrigo Fernandez Lovelle has denied that a move is imminent, as reported by Goal.

The Spaniard has found it hard to break into the starting eleven since his summer move from Deportivo La Coruna, only making 17 appearances this season, mostly from the bench. Due to his lack of playing time, the forward had reportedly decided to leave Arsenal in the summer with his agent confirming the move.

“Look, the truth is that Lucas wants to leave at all costs and is not happy at Arsenal, he hasn’t settled and hasn’t had a chance to play and show what he can do. No matter who is the manager in the future, we want to go. The player must have the chance to play.”

However, Fernandez Lovelle has now played down his recent quotes.

“Lucas has a contract with Arsenal. We haven’t spoken to AC Milan. It’s logical that someone is unhappy if they do not play – that’s why he’s a professional.”

Perez want more game in order to be picked for the Spanish squad for the World Cup and had told Wenger that he was unhappy about his game time a few months ago.