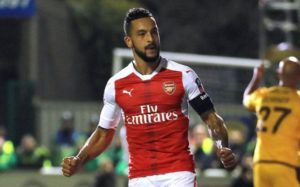 After a poor 5-1 loss to Bayern Munich last week, Arsenal got back to winning ways albeit in for very convincing fashion.

A non-League side in the FA Cup Fifth round on a 3G pitch had all the ingredients of a huge FA Cup defeat for the Gunners, especially considering the current situation the north London club find themselves in. However, Arsenal managed to just about get a 2-0 win, although at times they were very sloppy.

Captain of the day, Theo Walcott, scored Arsenal’s second of the night and his 100th goal in his Arsenal career, however, if truth be told he didn’t have a particularly great game, you might even say it was a typical Walcott performance.

Although he did hit an impressive milestone, many fans on Twitter weren’t exactly impressed.

This has been a great opportunity for Theo Walcott to get a feel for what it’ll be like playing in the Chinese Super League.