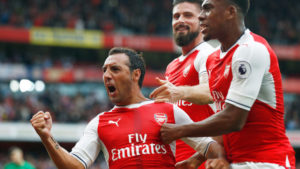 It seems Arsenal’s midfield will be without Santi Cazorla for the rest of the season, as the Spanish midfielder has run into further complications while recovering from an ankle injury sustained in October.

Prior to his latest setback, Cazorla had undergone successful surgery on his ankle problem and was expected to return to action before the end of the season. However, just as he seemed like he was ready to make a comeback,  Cazorla has suffered another setback which means that he will miss the remainder of the season in order to be fit for the next campaign.

The 32-year-old played his last game for the Gunners in the UEFA Champions League tie against Ludogorets, which Arsenal won 6-0.

With his contract extended until 2018, Arsenal will hope to get a fit and healthy Santi back next season, and even more so considering the problems in the middle of the park.