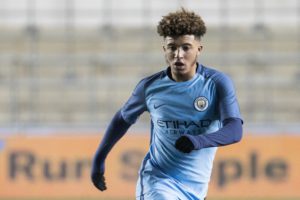 At only 16, Sancho has become one of the bright lights at Manchester City’s academy and is very highly thought of. The youngster joined City from Watford in 2015 for a fee of £500,000 and has since joined represented England at under-16 and 17 level, scoring 11 goals in 13 games.

Although young, City have already earmarked Sancho as a future first-team player but remain concerned that the prospect of moving back to London to join Arsenal’s youth academy may prove too great for the 16-year-old.