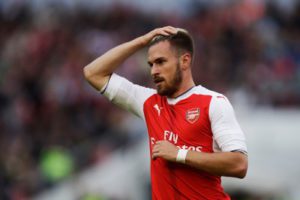 Aaron Ramsey has jumped into Arsene Wenger’s defence following a turbulent February, that has seen the Frenchman taking a lot of flak for Arsenal’s annus horribilis.

The Gunners have had a torrid 2017 so far, the matters made worse by the instability and uncertainty surrounding the club. There’s Mesut Ozil and Alexis Sanchez’s contract issues on one hand and the poor results as well as the toxic atmosphere on the other.

At such a time, Aaron Ramsey has bravely come out in his boss’ defence, shifting the blame onto the players, as reported by The Mirror.

“He’s been a great servant to Arsenal and great manager for me and the players. We have let him down at times. It is unfair some of the things that have been said. People are entitled to their opinion but he has been great for me personally.”