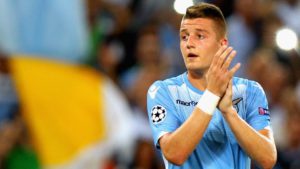 Potential new Arsenal boss, Massimiliano Allegri has told the Arsenal board that the first signing he wants at Arsenal is Lazio midfielder, Sergej Milinkovic-Savic, according to Express Sport.

Arsene Wenger is out of contract in the summer and it is still unclear if the Frenchman will sign the new two-year deal offered by the Arsenal board. With that in mind, the Express understands that Allegri has verbally agreed to take over from Wenger, should he leave Arsenal in the summer.

It is understood that Lazio midfielder, Milinkovic-Savic is to be at the top of his list of new recruits having tried to sign him for Juventus last summer. Lazio want the Serbian international to sign a new deal but the 22-year-old remains adamant that he will not discuss his future until the summer.