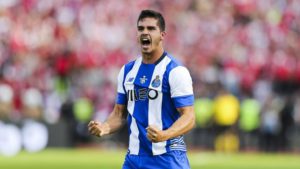 Arsenal are reportedly planning a big money move for Porto sensation, Andre Silva if, as expected, they lose Alexis Sanchez this summer, according to Calciomercato.

Silva has become one of the hottest prospects in European football this year, having scored 20 goals in all competitions so far this season. Reports in Italy have already linked the Portuguese prodigy with a move to Real Madrid with Christiano Ronaldo recommending his compatriot.

Arsenal, however, have been linked with Silva before and are reportedly willing to spend big in the summer to cover the probable departure of Sanchez. Arsenal might well be forced to sell the Chilean this summer as it seems he is set on leaving and the club needs to cash in on the player before he leaves on a free next summer.