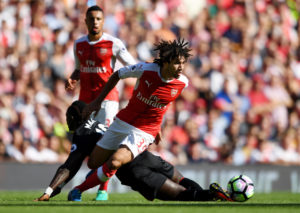 In his press conference this morning, Arsene Wenger gave an update on Arsenal’s injuries ahead of this weekend’s game against West Brom.

Arsenal travel to the Hawthorns on Saturday in what could provide to be a tough game for the Gunners. Arsenal have been faltering of late, with progression into the FA Cup semi-final being the only glimmer of light being the only positive over the last few weeks.

Arsenal can ill-afford to drop any more points in the League and with that in mind, Wenger gave an update on the fitness of Elneny, Gibbs and Oxlade-Chamberlain.

“Gibbs is uncertain at the moment. Oxlade-Chamberlain has a test today, but overall it’s the squad that was available [for Lincoln]. Elneny has joined in again. Apart from Cazorla, we should have everybody available.”

And on whether he expected Elneny to return so quickly…

“No, because at the start it looked like it was a very bad ankle injury. He has recovered well because he’s a very strong boy and very keen to come back as quickly as possible. It worked well for him.”