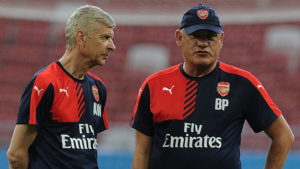 Arsenal’s assistant coach, Boro Primorac has come out in staunch defence of his manager, even going as far as branding the fans “ungrateful”.

Wenger’s future has come under huge pressure over the last few weeks due to the club’s poor form which included a 10-2 aggregate loss to Bayern Munich. Domestically, Arsenal are very much off the pace and look set to once again be competing for a top four spot rather than a league title.

Arsenal, however, do have the chance to win yet another FA Cup although the recent win over Lincoln City was preceded by fan protests calling for Wenger to finally leave the club.

Speaking to Croatia daily newspaper, Jutarnji List (h/t Goal), Primorac, who has been working with Wenger for over 20 years, has defended Wenger and responded to those who have criticised the Frenchman.

“Wenger isn’t considering leaving Arsenal. Of course it is ugly to lose 5-1 twice in the Champions League, even though it came versus Bayern.”

“We understand how fans are not happy, neither are we. But as for critics, there are no less grateful persons in football than fans and ex-players.”

“Arsenal’s strength in the past 20 years has been Wenger. It is not all about results, but also business part of the club that matters.”