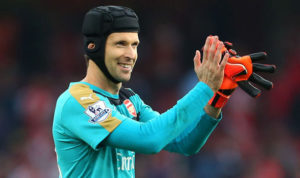 Arsenal’s first-team goalkeeper, Petr Cech, will miss up to a month out with a calf injury, according to the Mirror.

The Arsenal goalkeeper was forced to limp off on Saturday and now, a scan has indicated that the former Chelsea man, will be out for four weeks. Cech will now miss games against Manchester City, West Ham, Crystal Palace and Middlesbrough.

Although Cech could return for Arsenal’s FA Cup semi-final clash against Manchester City on April 23, Wenger will be forced to use second-choice Ospina until then. The Columbian hasn’t exactly been in great form of late and has already indicated that he wants to leave in the summer.