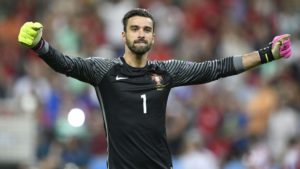 According to RMC Sport, Arsenal are set to bid for Portuguese and Sporting Lisbon goalkeeper, Rui Patricio.

With second-choice goalkeeper, David Ospina set to leave in the summer and Petr Cech’s slightly stuttering form over the last few months, Arsenal have identified the Sporting Lisbon goalkeeper who starred in Portugal’s Euro 2016 winning campaign.

On loan ‘keeper, Wojciech Szczesny is also an option but it is unclear whether his futures still remains at Arsenal.

Although Rui Patricio isn’t a long-term option for the Gunners, he’d still add quality to Arsenal’s ranks. Arsenal will face competition from Marseille for the 29-year-old who has a contract with Sporting Lisbon until 2019.