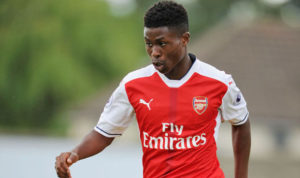 Arsenal academy youngster, Nathan Tella has confirmed that he will be leaving the club to join Southampton.

After a decade at Arsenal, the 17-year-old winger confirmed via his Instagram that he would be departing the club after a successful trial with Southampton.

The winger was informed in January that Arsenal would not be extending his contract. The youngster thanked the club but was excited to begin his new challenge with the south coast club.