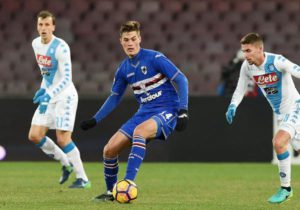 The Daily Mail reports that Arsenal will meet with the agent of Sampdoria striker, Patrik Schick today to discuss a summer move.

Schick’s agent, Pavel Paska, will meet with not only Arsenal but also Tottenham Hotspur to discuss a potential transfer, following the 21-year-old’s impressive debut season in Italy.

The Czech Republic international has scored nine goals this season albeit mostly used as a substitute. His coach, Marco Giampaolo, however, has joked that he keeps Schick on the bench to avoid him garnering interest from other clubs.

“I keep him on the bench, otherwise they’ll sell him! I want him here next season.”

The young striker joined Samp last summer from Sparta Prague and such has been his form that the Italian club quickly offered him a new deal which included a £21 million buy-out clause. Inter Milan, Everton and Crystal Palace have also shown interest in the striker.