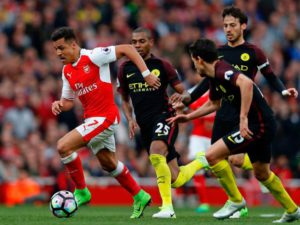 Arsenal finally managed to stop the rot against City and end their terrible form which had seen them lose four of their last five league games before Sunday’s match.

Although Arsenal conceded an easy first goal, the Gunners showed some fight and pride to not only equalise once but twice. It was quite apparent that Arsenal were lacking confidence but in a game where everyone expected them to lose, Wenger’s men managed to at least get a point.

Arsenal still sit sixth and very much in danger of not finishing in the top four. Considering that ominous outcome, the fans had a mixed response following the game.

In reflection I think we showed character to come back twice to earn a draw. On current form it was key we did not lose. #AFCvMCFC

It's a Desmond. Come on arsenal 👏

Any real fan knows thank you Mr Wenger but your time is up. Fresh thinking needed. #AFCvMCFC

How on earth can anyone think Arsenal have a future with Wenger? He has to be considered to be the worst manager in Arsenals history