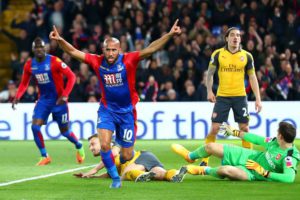 Against West Ham, Arsenal fans began to think that the club was finally out of its rut and a push for the top four was on the cards but alas, once again this season, Arsenal managed to dig themselves an even deeper hole.

Arsenal played 90 minutes of football devoid of any real quality, while Crystal Palace looked like a team well coached, organised and up for the fight, Arsenal seemed absolutely lost.

The club now sit firmly entrenched in sixth and under serious threat of not breaking into the top four. Here’s how the fans reacted to Arsenal’s horrific loss last night.

No leaders, no heart, no passion, no desire, no clue… and losing 3-0 to Palace. This team is a disgrace to the Arsenal shirt. #WengerOUT

When people start talking about Arsenal at work pic.twitter.com/MPzjVKjfiL

As an arsenal fan I am ashamed of my team tonight and wenger must go now to save dignity. Bring in Simeoni I say.