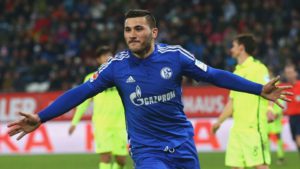 While the club seems to be in absolute turmoil on the pitch, Arsenal are making preparations for next year and remain confident of signing Schalke full-back, Sead Kolasinac according to Goal.

Kolasinac becomes a free agent this summer which has led Arsenal to begin talks with the defender. The 23-year-old has been watched by Arsenal scouts since the start of last season but due to his performances this season, both Juventus and Chelsea have also watched him with the latter bidding for his services in January.

Arsenal have been linked with Kieran Tierney and Benjamin Mendy recently but it is understood that Kolasinac is top of the list. The move would be a smart one from Arsenal, as Gibbs has become a mere bench player while Monreal is the wrong side of 30.