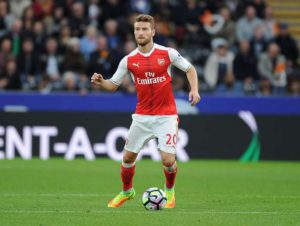 Arsenal still remain in the hunt for a top-four spot, albeit it looks increasingly unlikely that the Gunners will qualify for yet another year. The German international believes that if Arsenal can win tomorrow, that it will give the team a huge boost to finish the season.

“Obviously we have still our minds on the Premier League because there are still a lot of games left and everything is possible.”

“We are not supposed to only think of the FA Cup now, but it is an opportunity to forget a bit about the Premier League and to try to take that opportunity which can lift us again. I think it’s going to be an important game for us.”

“We’re trying to go on two lines. We’re trying to stay [in top-four contention] in the Premier League, but obviously go for the FA Cup as well. If it’s a trophy that we can win, we have to take it.”