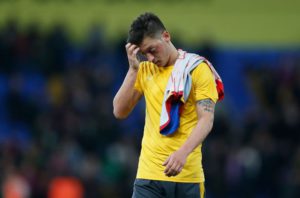 The Daily Mail reports that Arsenal’s star man, Mesut Ozil is demanding a contract of £300,000-a-week to stay at the club.

Ozil believes he deserves a significant pay rise, while the club are only willing to offer a deal worth £250,000-a-week. The German international has been locked in contract negotiations for some time now with his contract set to expire at the end of next season.

The German international is currently the club’s top earner and wants to be on parity with Wayne Rooney and Paul Pogba. Arsenal, however, believe that his performances this season do not warrant his large demands. Although they would ideally like to keep the German international, if he does not sign a new deal, they are willing to sell him.