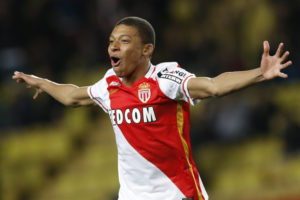 According to the Daily Mail, Arsenal are willing to match Monaco’s £85 million price tag for teenage sensation, Kylian Mbappé.

Although Real Madrid and Manchester United are both keen on the youngster, the Arsenal board feel the club can offer him the chance to play every week as a striker, something that may be unlikely at Real Madrid.

With the uncertainty over Wenger’s future and if Arsenal will play in the Champions League it would seem that Arsenal are probably at the back of the pecking order for the Frenchman. A move for Mbappé would be more than double the club’s record signing (£40 million for Ozil) but with the possible sale of Alexis Sanchez for £55 million, the club may well be able to afford the Monaco man. Whether he’d want to join the club, is a different matter.